This week’s lesson is the word Irony

The Food Stamp Program, administered by the US Dept. of Agriculture is proud to be distributing the greatest number of free meals and food stamps ever – to 46 million people.

Meanwhile, the National Park Service, administered by the US Dept. of Interior, tells us “Please Do Not Feed the Animals.” Their stated reason for the policy is because “the animals will grow dependent on handouts and will not learn to take care of themselves.”

There will be a quiz at the end of the year.

Below is a photo with a caption from a famous song.
Lyrics by Don McLean:
So bye-bye, Miss American Pie
Drove my Chevy to the levee
But the levee was dry
Them good old boys were drinking whiskey and rye 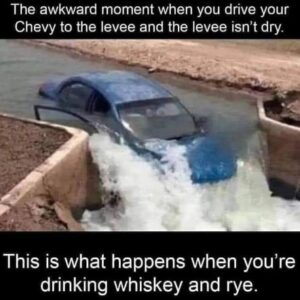 The question is: Had you been asked to provide a caption to the photo – what would you have come up with?

On the home front, I got a haircut. This was about 3 weeks late because of the holidays, so I was somewhat shaggy. The 3rd week in March needs an alarm.

Except for fog, the weather is uneventful.

Keeping Track, on the
Naneum Fan