Allen came a few days ago and plowed the 6” of snow. Actually, with a blade behind the tractor, is “plowed” the right word? Don’t know. Anyway late Friday afternoon snow began to fall and by 10 pm there was a new 6”. That makes for a foot of snow where he or I haven’t moved it.
The small birds and quail have a problem finding seeds in snow this deep. I buy a mixture of little seeds and Black-oil Sunflower seeds that meets with their approval. The small birds only go a few dozen feet away when I go to replenish the feeding station. The quail leave and settle in the trees about 75 yards away. They don’t return as quickly as the little ones.
Thursday there must have been a hawk nearby. Some of the quail were on the covered ramp and hunkered down motionless. I’ve had two quail knock themselves silly flying into windows. Both recovered and flew off. I think this happens only when the flock takes off in a panic in multiple directions – an action that the predator has trouble dealing with. One of the problems in feeding any of the animals is that the predators soon learn and watch.
¾ mile away, a family throws buckets of apples (rejects from a packer) in their front yard. At times it seems the entire local deer herd – 50 or so – is there at the same time. Usually there are only 10 to 20. There are cougars around but they have stayed a good distance away from the small cluster of houses.
Wild animals are not the only beings that have snow related problems.

A lady in Washington State received a $553 fine for driving in an erratic manner. The photo below suggests why. She told the officer her wipers didn’t work. 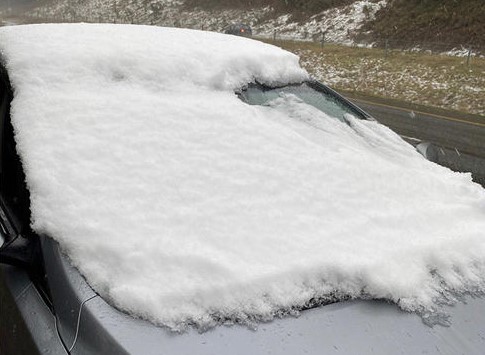 Wipers are supposed to work. I suspect a fine for that was tacked on to whatever else counted toward the $553. Buying a broom would have been cheaper, and she likely had one.

Earlier this week a truck driver on I-90, about 15 miles south of me, made a mistake in an icy fog. I haven’t found what that cost him, but he was cited as the initiator of a 38 vehicle pile-up.

One of the photos shows an overturned truck and its cargo, famous Washington apples in 5 pound bags and 40 pound boxes (a bushel).

There were no serious injuries to humans. I wonder what the total dollar cost was of this incident. There were police, fire trucks, EMT crews, commercial sized tow trucks — from two counties and a 10 hour closure of the main cross-state highway.

Flipping the page – some folks are having fun. The view below is from Saturday morning at Crystal Mountain Ski area just 50 miles away from me in the general direction of Hawaii. The usually route from me is closed for the season, so if I wanted to go (I don’t.), the trip would be 150 miles.
The home page has a rotating camera, and there are several others.
https://www.crystalmountainresort.com/the-mountain/mountain-report-and-webcams/webcams

Meanwhile, a deer needs a battery. His string of Christmas lights won’t light! This year’s entry, from Oregon, is on the right. On the left is a 2019 version. This seems to happen more often than folks see Santa Claus!

Did I mention I have some snow to move.
It is going to sag because my outside temperature just rose to 33°F.
An hour later from the above the temperature is 35°F and Allen has cleared the driveway. 😊