Friday:
Locally the temperature got to 70 today, very briefly, but the 20-mph wind made it seem like less.
We are expecting 41 tonight (Sat AM).
There has been some rain, especially over the mountains, so our fire danger has decreased, and the smoke has been blown out of the region. On the Naneum Fan it is still dry, but it appears the serious fires are over for 2022.
Meanwhile the Atlantic hurricane season is on the downslope without a serious threat to the Gulf & East Coasts. Still time. Tropical Storm Fiona may have some impact on the East Coast but that won’t be known until mid-next-week.

My excitement for the week was getting a flu shot. I needed a subscription filled so while at the pharmacy I got the “senior” flu shot.

I’ve had 3 Covid19 shots but not the 4th booster. I may get the latest and greatest about mid-November – before Thanksgiving. Currently, those have to be scheduled, but the flu shot is just a “walk-in”.

A flock of Merriam’s Turkeys came by today. They are not native here but seem to adapt well. The name is for C. Hart Merriam, the first chief of the US Biological Survey and all-around important person with numerous mammals named after him.

My photo lacks quality. I was outside with just the iPhone when the flock sauntered by. I have very little experience (expertise) with the phone, especially taking photos. I think there were 8, but I could not get them all in the frame. My driveway is on the right. I haven’t seen them for a couple of years. A year ago, I heard them but didn’t bother to go looking.

Geography is hard:
The Wash. D. C. football team produced a coffee mug for sale at games. The design uses the State of Washington rather than an outline of Washington, D. C. (formally the District of Columbia). The place does have a shape and a flag – who knew? 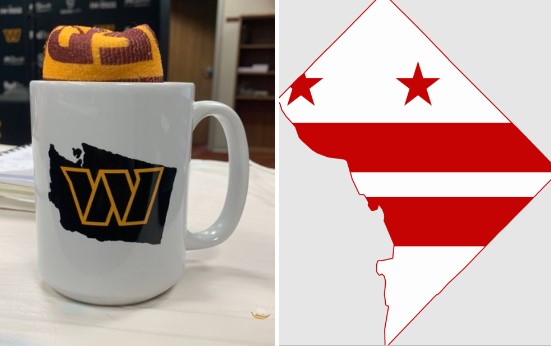 If I saw the image on the right, with a large W over it, I wouldn’t have a clue as to what it was. Have they made a collector’s item?