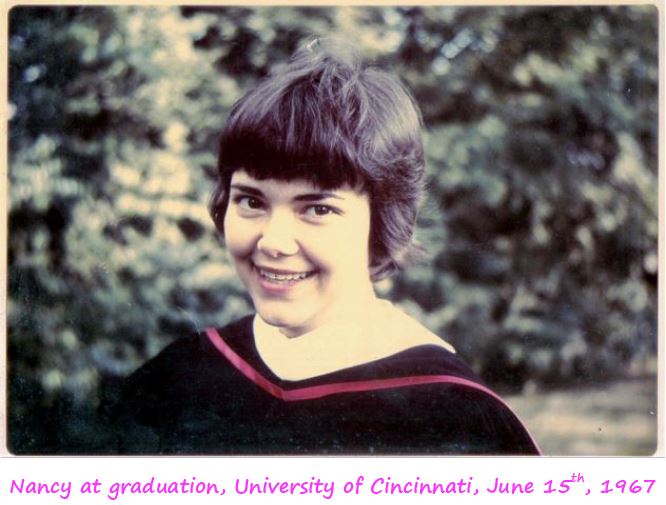 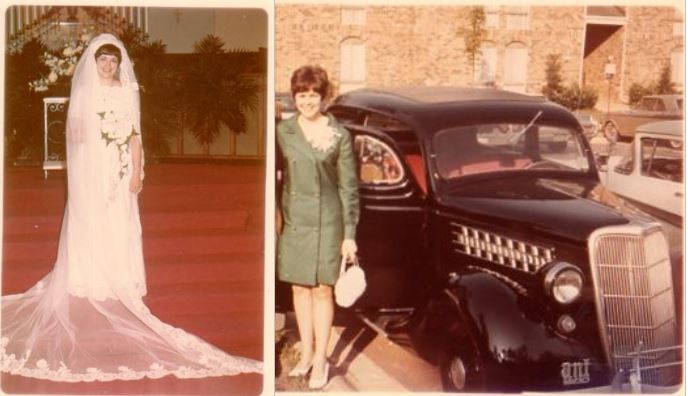 We were in Cincy from summer of 1965 until June of 1967. June 11 began “the long hot summer” in the City, including Avondale, just west of the University’s Scioto Hall tower where Nancy lived. I only remember a few things from the graduation time.
I remember the riots, watching from the balcony of her apartment. I remember seeing Jeeps with Nation Guard folks tucked under trees along the Campus walks.
The ceremony was held outside in the football stadium. Dignitaries were on a raised platform in the field. Mid-ceremony a large Collie came onto the field, wandered out to the platform, and anointed it with his pee, providing a highlight to an otherwise less than memorial event.
I also remember taking the photo of Nancy in the gown she wore. I did then, and still do think it is the best of the many photos taken of her.

The other two images were taken two years later. After years, scanning, and digital adjustments for the web, quality is not great. Shame.

Nancy’s father died when she was in 9th grade. Her mother’s second husband died when Nancy was on a 9 week tour of Europe; at the end of her time as a student at Georgia State University. Nancy flew home and missed the last few days of that trip. Just a short time after the funeral, she traveled north to graduate school in Cincinnati. Her mother did not handle the situation. Nancy went home to her mother and a teaching job at GSU. I went to The University of Iowa. Thus, our wedding was delayed by 2 years.

The car – Fordie, a 1935 Ford, was a company car that her dad drove for 2 years, then bought when the company replaced it. Nancy learned about cars and motor sounds with her dad and an elderly mechanic. It was her mobility when she got her driver’s license, and became our honeymoon transportation. Years later Fordie was sold to a lady who also had a childhood connection to ’35 Fords. She also had the money to have it restored to new-like status, and protect it, something we did not have the resources to do.

One of the many photos from the wedding. We had a joint ceremony of Baptist and Catholic, held in the church of Nancy and her mother. The catholic church was a few blocks away. We sat with the priest and minister and wrote the wedding vows. An audio recording was made; I think we listened to it once. I don’t remember a lot of the day, but do remember a child of the caterer tripping while carrying a large bowl of melon balls in the asphalt parking lot.
We stayed that night in a motel at Stone Mountain, then went back to her mother’s place to help her settle in to being alone again. Next we went to my folks place in Clarion, PA for two weeks before heading west to Iowa City. We stayed on there for 2 years after my degree, as an assistant in a research office, Nancy as a student. We moved farther west and settled in Troy, Idaho in 1974.

Next weekend I hope to have a few insights about “what happens after.”
John

{News of the hour: I-90 is closed in both directions because of snow and related accidents. Here: sunny, cool, windy}