I knew there were issue a week ago but I’ll just start with Tuesday; that’s the regular blood draw day.
We started in the door (auto sliding) and made one step inside.
A man was coming from our right – the direction we needed to go.
Nancy started to pivot that direction, and I took another step forward. Oops!
Her feet tangled and she went down – I had her hand and kept it from being a hard fall. With the man’s help we got her up, and the receptionist rushed over with one of the tall chairs. A rest, and then on into the real waiting room.
I told Kim (phlebotomist) she need not draw a vial for the clotting index INR but could use a finger-prick. She did better, taking a drop from the vial being sent to the lab. INR this way is immediate.
We had little to do in town, so went home and had lunch.
Not long after our “doc” Chelsea called and reported the Potassium level had spiked into critical level and we should think about going to the ER. I questioned whether or not we could just walk in. So she called the ER, then called us back to say they were expecting us.
Indeed, they were – so no waiting. The ER doctor and about 6 or 7 others fussed around Nancy, and the hospital doctor of the day came in also. He came to talk serious stuff with me, and then arranged the transfer from ER to the Critical Care Unit (CCU).

To digress some – Nancy was mentally confused – this I knew, but also knew I was going to talk to Chelsea on Tuesday, so did not call her Monday. Nancy’s “sleep study” was scheduled for Wednesday at 8 PM, and I was sure that would be disaster in her condition. On the way to the ER (about 17 minutes), I called the Sleep place and cancelled.

The ER doctor asked Nancy about name, time, date and where she was. She knew all the answers. Then in an instant she would say something very odd. She heard the conversation when we cancelled the sleep study but then told a nurse she needed to get out for the study. At some point she told me someone in the hospital was going to take all my clothes and I would have to walk the streets of Ellensburg naked. (That happened the next morning, I guess; but she was behaving strangely.) She was trying to remember the words to the “doxology” song and wanted nurses and aides to sing with her.

At this point her Potassium was recorded at 6.5.
According to the Mayo Clinic, a normal range of Potassium is between 3.6 and 5.2 millimoles per liter (mmol/L) of blood. A potassium level higher than 5.5 mmol/L is critically high, and a potassium level over 6 mmol/L can be life-threatening. {Last year, mine was just 4.0.}
They gave her a cocktail of chemicals to bring that down while still in the ER. By Wednesday Noonish it was down to 5.5, and Thursday to 5.1. That’s good. Not so good is that she has retained a weight gain of 20 pounds since early December, and that hasn’t responded. With weak muscles from a year of inactivity, this complicates simple movements, such as getting on and off of a regular chair (think commode). I’m trying to locate a high and wide bedside unit.
As that dropped, her mental condition improved. To me the result was stunning. For the time we were there the CCU doctor was a retired man but working at least a few days a month at regional hospitals. He too (along with nurses and aides) were impressed with the rapidly changing (improving) mental state. I was told on Thursday to expect a discharge on Friday.
Had a short visit with a Physical Therapist and a long visit with a Social worker, Polly. They were (did) to set in motion actions to get help at home with in-home things. On discharge, I was told folks would be in touch Monday. Polly also arranged for Nancy’s 2nd Covid shot to be brought out to the house.
On Thursday I ordered a powered hospital bed for home, and borrowed a walker from Hospice Friends. The bed was to arrive at 11 am Friday, so I visited Nancy at breakfast, then went home.
A young man named Dylan came with the bed. This is his #2 job. Number 1 is with the EBRG Fire and Rescue folks, where friend Sara is an EMT. The bed has 3 small electric motors and the gear to (1) raise the entire frame, (2) put a kink under the knees and (3) raise the head & shoulders section.
#3 was dead on arrival. A metal piece had been drilled with two holes too close to the end that attached to the drive shaft from the motor. Those holes (metal) tore, leaving a sharp edge like on the lip of a just opened tomato can. Dylan and I tried to fix this, but could not make it work.
Otherwise the bed was fine, so he left it and will bring a new one Monday. My work-around is shown in this photo. 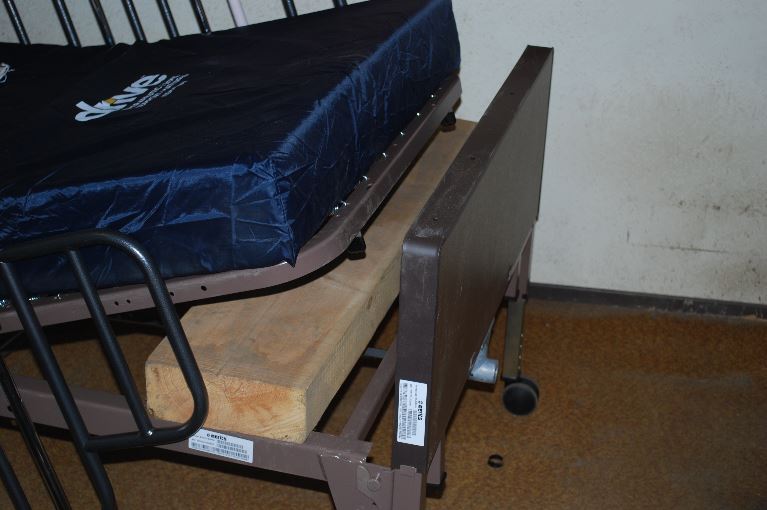 Once Nancy was in the bed, she thought it needed tilted more. I rotated the plank. I’d already taken the photo; a new one seemed unnecessary, but the height is now about double what you see.

Diet instructions were given to me. That is, a list of high, medium, and low K foods is provided. I managed to dress up a mushroom soup, with a side of pears. I will only note that this is going to be a problem. For example, when on the blood thinner Coumadin there are things one is to avoid. Of course these seem to be low in Potassium. Also, there are a few things Nancy will not eat – Watermelon! Butternut squash (she likes) is a no. Summer squash (sorta doesn’t like) is fine.

I guess that is it for now –

Remember to change clocks this weekend!