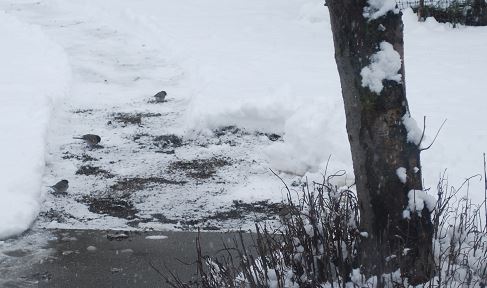 An interesting week: I think it was changing to Daylight Saving Time. Could have been the “Worm Moon” or maybe it is because of Friday the 13th. But also, Saturday is “pi”- day [3.14] and geeks the world over are excited. (We are having Pecan Pi to celebrate.)

Anyway, the world has now been cancelled, so I guess we can get off. We got 4 to 5 inches of snow on Friday. I broomed off the concrete pad and uncovered sunflower seeds. Juncos were waiting. I’ve moved the feeding station farther from the house and that area, too, was attracting many birds.
The cold air is to last until Monday.

I noticed the Crosstrek’s tag was in need of an update last week and we were a day late getting the new one. Take a look at this plate from Louisiana. September 1997! 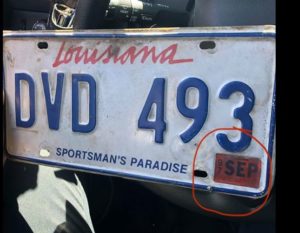 This is Nancy’s pillow from when she was in the hospital in Yakima. She stayed in the ICU into 2010. I had it under “stuff” in a bedroom closet and just uncovered it this week.
Interestingly, Nancy has lasted longer than the hospital.

In August 2017, a group called Astria Health (don’t know the history of this) bought the downtown Yakima Hospital. Five years later it is gone. Closed. Kaput!
The place had a long history. Members of the Sisters of Charity of Providence, a Catholic teaching and nursing order, opened St. Elizabeth Hospital, August 17, 1891. This was the first hospital facility in the Yakima area.

When Nancy was there, old photos and history-boards were on the walls of a ground floor corridor. There were still nuns associated with the place as chaplains, and one came and prayed with Nancy before her procedure began.

Nancy’s favorite story to tell is about that prayer. “The nun was late arriving, but asked the surgeon if she could say a prayer. They had not sedated me yet, and he said, go ahead. She had been visiting me in my room for weeks, and the prayer was personal at the start, and then went into the Lord’s Prayer. I prayed it along with her.”
After I left the ICU and came back to the hospital with John to bring gifts to my caregivers, I saw her in the parking lot on our way in. Gave her a box of candy in a red-heart shaped box, and thanked her. She said, “I will always remember you. I have prayed the Lord’s Prayer many times before operations, and you are the first person ever to pray with me.” (end of update on John’s Friday column — by Nancy)

When in Troy, ID we owned a small building – purchased with the idea of converting it into an apartment for Nancy’s Mother. Within a few hundred feet there was a bank, post office, and several stores.

The conversion didn’t get done and we had an empty building. For about 3 years we ran a video arcade with full sized standing units of games such as Donkey Kong. We also wanted to introduce computers but the kids were not interested.
But the name stayed: The Computer Junction.
Quarters were used to play, but brass tokens allowed us to have 5 for $1 and other promotions. The tokens were priced – to us – such that buying 1,000 was about the same as buying 100. So we had lots. And lots left when we closed the arcade. They got moved to here and placed on the shed floor – 2 boxes, quite heavy – and buried under a mountain of stuff. 31 years later they have been found. We now know of several people that want a few. Speak up. We only have about 900.

The USA Antarctic Program, McMurdo Station, on Friday asked for an “emergency medical evacuation” of a person but did not tell us why.
Oh well. Australia sent a plane with aeromedical and retrieval specialists from the Royal Hobart Hospital and Ambulance in Tasmania. Then they took the ill person to Christchurch in New Zealand.

The plane in the photo is an Airbus A319. Link to story