Item #1: A look at the dropped ceiling

We mentioned my project for the holidays. The garage ceiling was calling: “Help, I’ve fallen and I can’t get up.”
Below is how it looked. 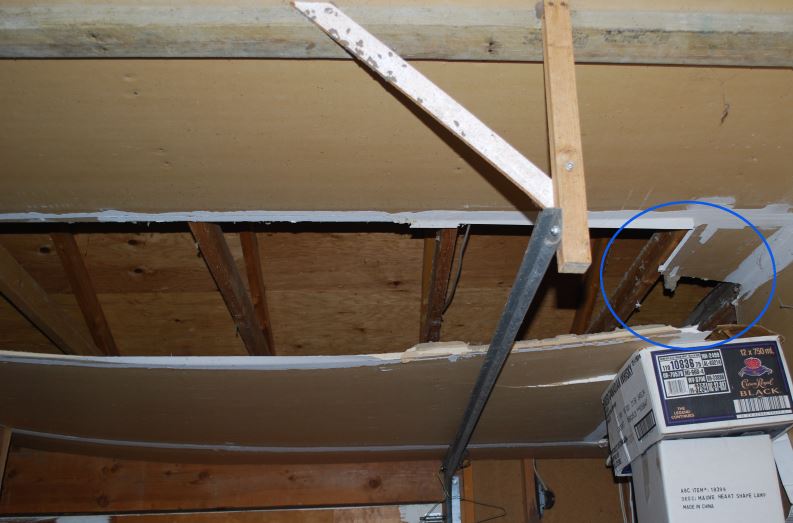 The piece is 5 ft. wide and 11 ft long. It mostly stayed intact except for the right side – note blue oval. The metal rail (only one shown ) for the overhead-door, and the old box, prevented a farther drop and a more serious breaking apart of the plaster-board (aka drywall). 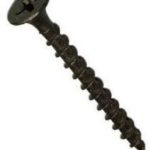 The current recommendation is to use (ceiling) drywall screws at the rate of one every 6 inches. Photo two, below, shows a problem.
Nails were used, with an okay length {1.5 in. through ½ inch material}. However, they are not screws and they are not 6 in. or less apart.

Because thin nails tend not to hold well as the wood ages, and drywall is heavy, about 64 pounds for 10x4x half-inch piece, these can sag or fall under various circumstances.
A complicating issue is that here-&-there a nail will stay in the wood and pull through the sheet. One such is on the left side of the blue oval in the top photo. There is some plaster on it, so it looks like a white dot. All nails have to be removed before the sheet can be shoved back into its place.

Did I mention I am not fond of standing on things and reaching over my head to do stretching exercises as required here?

I used 2x4s and 2x6s to get it up and hold it there. So, for now I have stopped the flow of heat from the garage where the water tank and softener are. The original ‘build’ did not include heat or insulation in this 2-car garage. We use small oil-filled radiant heaters to keep it above freezing. The other side came down just like this years ago, and a corner in another place. Twenty years has gone by, and now the third episode.
Time for a full-fix out there. Perhaps, in the spring we will have a contractor convert the car-space to living-space. The would be a major expense. A minimum will be to replace the ceiling, garage doors, insulate thoroughly.
Looking into it now. Happy New Year!

A fancy building, the Shanghai World Financial Center, has been called the “bottle opener.”

This photo of a dumpster was posted. Is the wording a comment on the “state of being” of the thing, or a directive. Either way, it is likely an unnecessary use of paint. 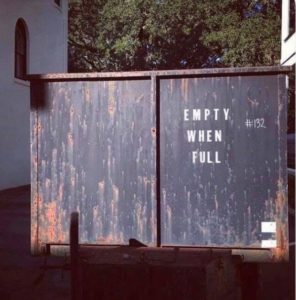 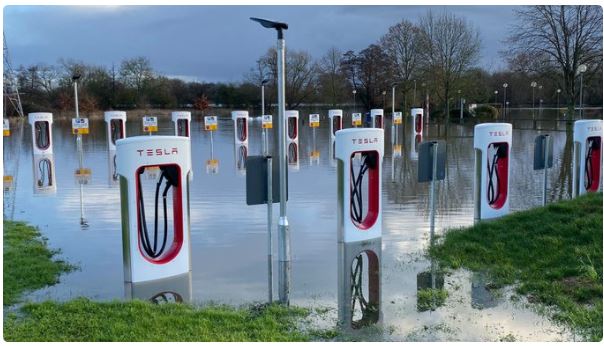 If you had a boat with batteries, you can float along side one of these things and plug in. 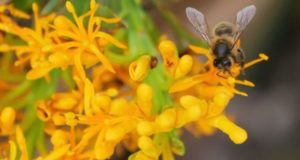 My photo snap for this is an “in close” view but the amazing thing is that it is Christmas time and this thing is blooming.
The Nuytsia floribunda, or ‘Aussie Christmas tree’ as it is commonly known, bursts into bright orange life each December. Well, it is summer near Perth, so having things bloom is not out of the ordinary. Nevertheless, this is out of the ordinary.
This is a giant mistletoe only be found in the south-west corner of Western Australia and is the world’s tallest parasitic tree. Do have a look.
Aussie Christmas tree

~ ~ ~ ~ ~ ~ ~ ~ Name after himself !
Meaning of name: Nuytsia is named in honour of Pieter Nuyts, a member of the council of the Dutch East Indies who sailed along the south and west coasts of Australia in Gulde Zeepard in 1627 and named the land Pieter Nuyts Land. Floribunda is from the Latin words floris, meaning flower, and abundus, meaning abounding in.
Aboriginal name: Mooja