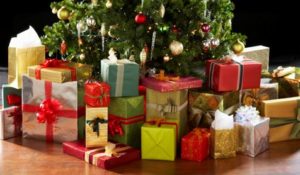 Bad time of year for dogs. Especially small dogs. The photo here (from the web) shows several wrapped packages about the size and shape of fancy candy.
The chemicals in chocolate are not good for dogs. Small amounts can cause a dog to vomit, and larger doses can cause a racing heart, seizures or death.
Cats would show similar symptoms but generally won’t rip packages open and eat the entire box.
A box of specialty seasonal chocolate pieces is a modern mystery. Is there “dark” chocolate therein? If so, think of “dark” as bad then, for your dog. Is the box the same size as 20 or 30 years ago? Likely so. Is there as much inside the box as there was? Likely not. Same price – – more air!

Put your chocolate where the dogs can’t get to it.

(Dogs are also sensitive to grapes, raisins, onions, garlic and Xylitol, a sweetener used in gums and candies.) 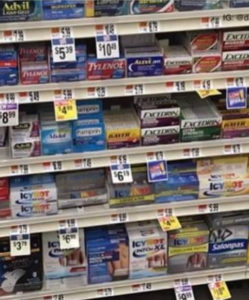 This photo shows shelves with pain medication. Note Advil on the top left. Tylenol and Excedrin are near the top.
Down at ankle level note Icyhot and Salonpas. There are various types, including patches meant to sooth back pain.
I saw a note from a guy that assumed he was much taller now than years ago. He based this on the fact that when he wants to pick something up it takes much longer to get the job done. Reaching that extra distance just takes longer.
No one over 70 would put back pain medication near the floor.

You might need a photo for your Christmas card. Some ideas. 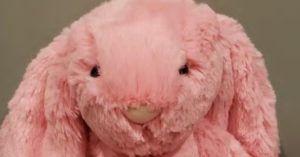 Harvey was a 6 foot 3.5 inch invisible rabbit that traveled around with Elwood (played by Jimmy Stewart), often found at their favorite bar, Charlie’s. Harvey is a pooka, a benign but mischievous creature from Celtic mythology.
I thought of this 1950s film when I saw the photo of the pink bunny. I can’t say why in that pink and invisible don’t mesh.
Anyway, the pink bunny was given to a little girl in Saskatoon. Much else was given to the very needy family, but the pink bunny is the central character in this story.
A Christmas Story

One of the more interesting stories this week is about cash. Many countries from around the world have done their sums and discovered they have printed more bills than now are around. Where are they?
Where are you hiding your cash?
In the case of the USA, NZ and other such, much of the cash (apparently) is sent or taken to other countries. Socking those bills away provides some protection against economic turmoil, especially in countries with a record of instability in their own financial systems. Ruth Judson, a Federal Reserve economist, has been investigating this issue.
{Notes copied and pasted from The Wall Street Journal}
Sometimes bank notes are buried in the garden, where they start decomposing, or hidden in attics, where they are used by mice for building nests. Construction workers recently dug up an estimated $140,000 buried in packages at a site on Australia’s Gold Coast, prompting a police search to find the trove’s owner.

In September, a court in Germany ruled on a case brought by a man who stuffed more than 500,000 euros in a faulty boiler only to see it incinerated when a friend made a fix on a cold day while he was on vacation. The man sued his friend for the value of the lost bank notes plus interest. He lost.
In the comments following the WSJ article several people claimed to have a few dollars in an envelope or other stash. I liked this comment by Preston E. – – It ain’t me.