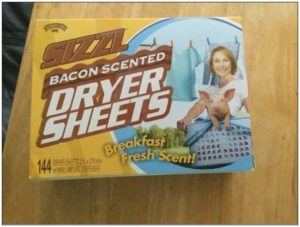 The ‘dryer sheet’ image is unrelated to the comic.

With U. S. politicians much in the news, I wondered why one party has a donkey and the other has an elephant as symbols.
A few years ago I read about how our image of Santa Claus developed and learned of the cartoonist Thomas Nast and the publication Harper’s Weekly.
I don’t recall reading that Mr. Nast was involved in setting the political and social views of the time, 1862-1886, but now I see that was also true. Thomas was born in Landau, Germany, as his father was a trombonist in the Bavarian 9th regiment band.
His Wikipedia entry is here. It has a photo of him and over a dozen of his cartoons. There is also an odd ending to his life and career. 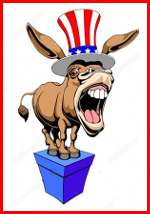 Further good news is that we won’t be traveling in the Equatorial region in August. Actually, it likely will be hotter here, but plants will need water. Anyway, you can decide whether for you, this would be good or bad. 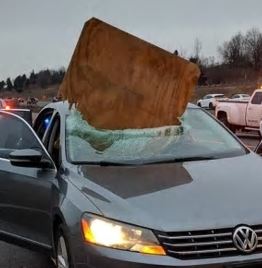 This isn’t the first of “flying plywood.” In 1947 a very large plane flew a short distance. It was made mostly of Birch, although called the Spruce Goose.
Hughes H-4 Hercules, 1947

This week’s story is from Brampton Ont., near Toronto.
Plywood, meet windshield
“Just moments after watching a piece of plywood soar through the air and smash into her windshield, Jaspreet Sran stopped, stepped out of her car and assessed the damage.
Praise be to Ms. Sran!

This story brings memories. While in high school a friend had a Jeep and was pulling an old trailer loaded with top-soil. The entire wheel/axle structure under the trailer collapsed going around a bend.
#2: I was pulling a small trailer with wood in it, heading down a long hill toward Moscow, ID. The trailer started to sway but came out of that if I went a little faster. Then it started to sway again. So, a little faster. Short version: pieces of lumber started to lift out of the trailer and sail off the road and down an enbankment. No one got hurt, no damage, except a few scrapes on the wood. Neat! Don’t try this.
#3: Just a few months after Nancy got her new Forester we went to Moses Lake; 80 miles east of EBRG. I was driving in somewhat heavy traffic with many vehicles behind, including a big rig. I was in the center lane and from a Pick-up in the right lane, a large cardboard box lifted off, came our way and landed about 100 feet in front of the Forester. There were a couple of seconds to watch it, and look around and in the mirrors. At 70 mph one goes 102 feet in 1 second.
By the time the box hit the pavement I had decided it was empty, and of the several possibilities, it was the best thing to hit. It made a nice sound, but no damage.

Consider what a fully autonomous car should/could/would do in such a situation?

Item #5: If you see a derelict van 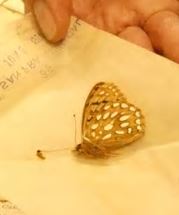 Note to friend Caitlin: Northwest Butterflies
Put a selection of your excess specimens in an old van, remove all personal info, park the van miles from anywhere, and walk away.

Story behind mysterious butterfly collection still baffling for Manitoba Museum, caught in California a century ago.

Our plant in the living room has been blooming. It is near a south-facing window. I give it a quarter turn every few days and water on the weekend.